Canadian Locksmiths can duplicate spare keys and replace lost and stolen car keys for the entire line of General Motors cars and trucks. We also supply and program keyless remotes and transponder chipped car keys. GM was one of the early adopters of adding security systems built into the car. It started in 1986 on the Pontiac Corvette but then over time became standard across its entire line of vehicles of Buick, Cadillac, Chevrolet, GMC, Hummer, Oldsmobile, Pontiac and Saturn.

The first system used by GM as called the Vehicle Anti Theft System or more commonly referred to as VATS. The VATS car key system used by GM was a small black pellet on the metal blade that contained no electronics, its was simple a resistor. They produced approximately 15 different resistor values and each car came off the factory line programmed to 1 of those 15 VATS resistors values. You would insert the VATS key into the ignition cylinder lock and the car would read the resistance value on the key. If is was the correct one that matched the one in the cars computer is would allow you to start the car. But if is was the wrong one the car would lock down for up to 4 minutes. This means even if you immediately tried the correct VATS key the car would not start until the 4 minute lockdown was completed. There are two variations of the VATS key system one is a single sided cut key and the other is a double sided cut key convince key. These keys have not been used for some time and the cars they work are quite old. The most common call we get is that the VATS security light comes on even when using the correct key and they cannot start the car. Sometimes the key can simply worn out or the old brittle wiring in the steering column has shorted or broken. Canadian Locksmiths can resolve both of these problems. We can come onsite to your car to cut and program a new key at your car and they always includes a 90 day warranty. 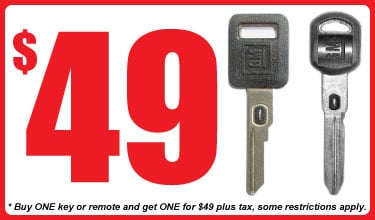 The second generation of security GM implemented was not a key but an ignition. GM realized the most common method of attacking for stealing the car was people jamming something into the ignition cylinder lock and forcing it to the on position. So GM came up with an idea to protect the ignition cylinder lock from this type of theft. This ignition system is referred to as a Passive Anti Security System or PASS system. What makes it unique is that the PASS ignitions contained a magnet inside of the ignition. The magnet used the Hall Effect to record the ignition into the car’s computer to allow the car to be started. If someone attempted to force the ignition lock cylinder  to the ON position this fragile magnet would break and that would in turn activate the immobilizer system and prevent the car from starting. Canadian Locksmiths receives calls all the time about people saying my car key won’t start my car and there is a THEFT or PADLOCK symbol on their dashboard. This is a sign that the car is in lockout mode and needs service. It could be as simple as reprogramming the PASS ignition magnet back to the cars computer or installing a new PASS ignition and programming it. Canadian Locksmiths can provide both of these service at your car anywhere in Windsor and Essex County. and they always includes a 90 day warranty. 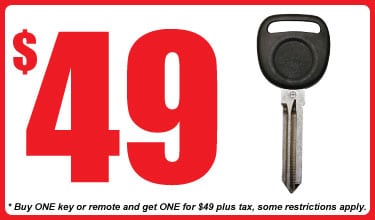 The third generation of computer chip car keys used by GM is the transponder key. They use several varieties of coded keys and keyways on all of the Buick, Cadillac, Chevrolet, GMC, Hummer, Oldsmobile, Pontiac and Saturn cars. This also when GM added a keyless remote option to the car. There are several varieties and button configurations the two most common are the the OUC60221 and the other is the KOBGT04A. They both look similar but are not compatible with each other. We can supply a keyless entry remote for your GM car and program it for you all at your car anywhere in Windsor and Essex County. Canadian Locksmiths can also cut duplicate keys and provide lost and stolen key replacement service for all these keys and remotes. Some of the chipped car keys look like they don’t have a chip inside of them. But look closer, if your GM key has a PK3, PK3+, RW, T5 or a symbol of a circle with a plus sign then its has a chip inside. The other variety of these keys is called a keyless flip remote fob. The key is hidden inside of the remote and by pressing a button on the remote the metal blade will flip out. You have the convenience of the transponder key being built into the keyless entry remote. If you look closer at these keys you will see that there actually high security milled and laser cut keys. Fortunately Canadian Locksmiths has the key cutting machine to cut these onsite at your car. Simply call Canadian Locksmiths with the year make and model of your car and we will give you an accurate quote with no hidden fees. When the job is completed you will pay the price quoted never anything extra and they always includes a 90 day warranty. 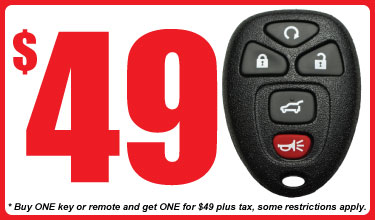 The current generation of keys and keyless entry remotes that GM uses is wireless coded proximity. Now you simply walk up to your car and the coded prox will automatically unlock the car door as you approach. This convenient keyless entry system allows your hands to be free from having to press the remote. Then when you get inside of the car simply press the start button on the dashboard to start the car. No need to remove the keyless entry remote from your pocket or purse. 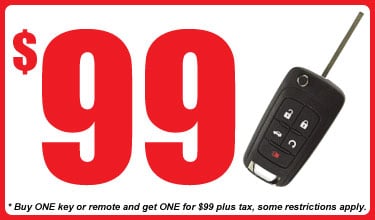