Canadian Locksmiths has the tools, training and stock to cut virtually every Chrysler, Dodge, Ram and Jeep vehicle. It doesn’t matter if you just need a duplicate spare key or you need a lost or stolen key replacement service, we do it all. Chrysler implemented their immobilizer system in the the late 1990’s. It first started as an option on a hand full of cars but has now become mandatory on its entire fleet of vehicles. Canadian Locksmiths will come to your home or place of work to cut a spare duplicate key or keyless remote. Even if you have lost all your keys, fobs or keyless remotes we can still come out to you and in some cases for less than the dealer. No need to pay to have the car towed to dealer and wait for parts. We offer a mobile service covering all of Windsor and Essex County and always backed by a 90 day warranty.

Canadian Locksmiths carries the most modern state of the art tools to do the job as efficient as possible. Chrysler, Dodge, Ram and Jeep have implement a higher level of security when it comes to car key programming. In order to program new keys to your car a secret 4 to 5 digit pincode, skimcode or passcode is needed. Without this code you cannot gain access to the cars immobilizer system to program spare or duplicate keys. Fortunately for you we have the resources and tools to extract this pin code, skim code and pass code from the car onsite. Some locksmiths will ask you for the VIN number of the car, not us. Just give us a call and tell us where you are at, that’s it. We can make a duplicate key and replace a lost or stolen faster than anybody in Windsor. and they always includes a 90 day warranty.

The first generation of Chrysler, Dodge, Ram and Jeep security systems used several types of keys, keyless fobs and remotes. The early system was a transponder chipped key that looked like a normal key. The keyless remote to lock and unlock the door was separate from the key. You can’t see the computer chip inside but it is easily identified by the color of the plastic. An all metal key obviously has no chip, the black colored key also doesn’t have a chip. But if your Chrysler, Dodge, Ram and Jeep key is grey or tan colored it has a transponder computer chip inside of it. Canadian Locksmiths has the tools, stock and equipment to duplicate spare car keys or replace lost and stolen car keys onsite to get you back on the road. 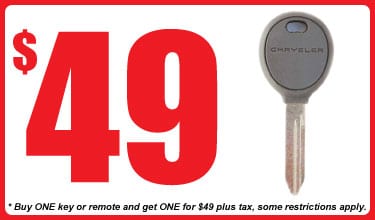 The second generation of Chrysler, Dodge, Ram and Jeep keys is referred to as Remote Head Keys. The RHK integrated the key blank with the remote functions into a all in one package. This added both convenience and reduced your key ring size. The keyless remote function came in several different button configurations and two primary part numbers, OHT692427AA and M3N5WY72XX. They may both look the same but they are not interchangeable. They came in the basic three button panic or the more complicated six button used on Caravans and Town and Country. Canadian Locksmiths has all of these different keyless entry remote variations in stock and we come to you anywhere in Windsor and Essex County and they always includes a 90 day warranty. 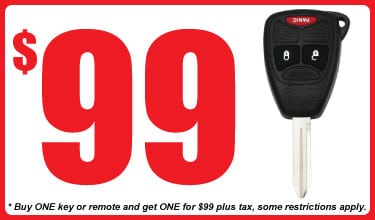 The third generation of Chrysler, Dodge, Ram and Jeep keys is not a key but its called a FOBIK. This new design now replaced the metal key with a fob that looks like a usb plug. You now plug the keyless fobik into the cars and turn to start the car. This new style of fobik has a few different part numbers like IYZ-C01C and M3N5WY783X. Canadian Locksmiths has all 11 different button configurations in stock. This new style of keyless entry remote now has a hidden key inside of it. If the battery on your keyless remote dies simply remove the emergency key to unlock the door as normal. 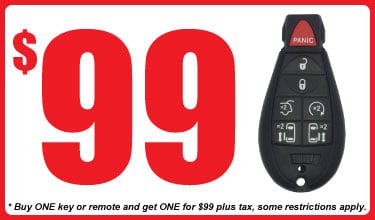 The fourth and current generation of keyless entry remotes used Chrysler, Dodge, Ram and Jeep is a proximity remote or prox. Now you simply need to walk up to your car to have the doors unlock automatically. To start the car simply press the start button on the dashboard, no need to remove the keyless remote from your pocket or purse. This is very complicated system but Canadian Locksmiths can come to your car anywhere in Windsor and Essex County and provide you a spare on or replace a lost or stolen one and they always includes a 90 day warranty.