Canadian Locksmiths was established 30 years right here in Windsor. In those 30 years we have helped customers countless times who say they lost my car keys for my Ford, Lincoln and Mercury cars. Canadian Locksmiths can duplicate transponder Ford keys and cut and program replacement lost and stolen Ford keys. Simply give us a call, text or email for a free quote. We offer up front pricing with no hidden fees and it always includes a 90 day warranty. After the job is done you pay the price quoted with no surprises or extra fees. If it just a simple spare key duplication job or a more complicated lost or stolen car key replacement service we can help. Canadian Locksmiths services all of Windsor and Essex County with our mobile shop on wheels. 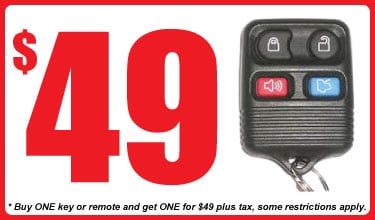 Ford was one of the early domestic manufacturers to implement the transponder key system into their cars and from the start ew have been stocking, cutting and programming those keys. Ford started in the mid 1990 and was at first a payable option on the car. But now has it has become standard on their entire fleet of Ford, Lincoln and Mercury cars. Your Ford key may look like a normal car key with a black plastic head but inside that plastic contains a transponder computer chip that requires no battery but is integrated to other cars immobilizer system. 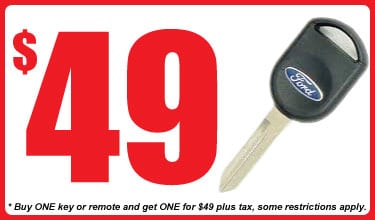 Ford’s first generation of computer chip car keys was a small glass vial that contained and antenna and tiny electronics. The antenna would be picked up buy the cars immobilizer system when it was inserted into the ignition cylinder lock. The car and key would then communicate with each other to allow the car the start. So if your need a spare key cut and programmed for your Ford, Lincoln and Mercury car and it has a large plastic head there is a chip inside that Canadian Locksmiths can cut and program for you. Ford, Lincoln and Mercury cars also came with a keyless remote that had between 3 button up to a 6 buttons on the remote. It was separate from the key which made it easier to lose. Canadian Locksmiths carries all the different key variations and keyless remotes in stock. 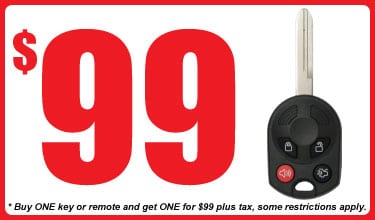 The second generation of Ford, Lincoln and Mercury transponder keys is a remote head key called a Integrated Keyhead Transmitter or IKT. Ford, Lincoln and Mercury took the idea of combining the keyless remote and key into one unit. You still have the standard metal blade but now its combined with a remote. The remote uses a battery to operate the keyless remote functions and the immobilizer system has the same function of authorizing the car to start. The advantage of this IKT system is that it allows you to carry less keys on your keychain. The problem is if it gets damaged or wet the complete IKT stops working. There are a few variations of this keyless remote system and Canadian Locksmiths carries all the variations in stock and they all include a 90 day warranty. It doesn’t matter if you just need a simple spare key cut duplicated or you need a lost or stolen car key replacement service, we can do it all anywhere in Windsor and Essex County.

The third variation is a modified Integrated Key Head transmitter or IKT. Ford, Lincoln and Mercury then adopted an European style of metal blade which has an unusual cutting design. It’s sometimes referred to as a laser, groove or sidewinder key. Its distinguished by a groove that is milled from both side of a blank piece of metal. The advantage of this high security key is that it’s more sturdy and less likely someone can duplicate it without your permission. It’s still has the keyless remote built into it with various remote configurations and yes Canadian Locksmiths supplies and cuts these keys onside at your car anywhere in Windsor and Essex County. The machine required to cut these high security keys are expensive, rare and precise and fortunately Canadian Locksmiths has one inside of our mobile shop on wheels. In this generation. Which means you don’t need to tow you your car to the dealer for a lost key or stolen key replacement service. We can come to your car with our modern equipment and cut the cart key right onsite.

The fourth and current generation of keys made my Ford, Lincoln and Mercury is not a key at all but called a keyless proximity remote and often referred to as a prox for short. The keyless proximity remote is just a more advanced transponder and keyless remote. Now instead of needing to press the keyless remote button on the prox to unlock the door just simply standing in front of the door and touching the drivers door lock handle will unlock it. Same goes for the trunk lock and and hatchback lock. Once inside the prox can be recognized wirelessly by the car and adjust the seating and steering wheel to your saved preference. Then to start the car you don’t even have to remove the prox from your pocket or purse, simple press the start button on the dash to start the car. The car’s immobilizer system will use it internal antenna to search for the correct coded proximity frequency and it it is recognized the car will start. That very complicated system requires some complicated tools and computers. Canadian locksmiths carries these keyless push to start prox fobs and has the training and tools to program them and they always includes a 90 day warranty.

Ford, Lincoln and Mercury also introduced a system integrated into the car called the Ford MyKey. This system allow the owner of the car to restrictions the car so that for example the car will not travel faster then 130 km/h or the radio cannot be turned on too loud. The Ford MyKey is a great system and has many functions but there is one problem Canadian Locksmiths has received many call for. If you lose your admin MyKey you can no longer revert the changes back. But don’t worry Canadian Locksmiths has a solution for this.